Cauda Equina and DM in the German Shepherd Dog

Of the different conditions that can affect the spines of German Shepherd Dogs, no two are feared more than cauda equina and degenerative myelopathy. As anyone who has had a dog afflicted by either of these conditions knows, these conditions are debilitating, progressive, and permanent. Good breeders do their best to breed around these two issues, but with the uncertainty of genetic recombination and inheritance, these conditions can still pop up even in well-bred litters. 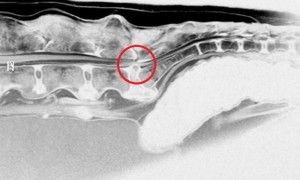 While “cauda equina” is used to refer to a particular syndrome found in German Shepherd Dogs, it is technically named after the affected structure. The cauda equina, also known as the “horse’s tail”, is the structure in the spine formed by the nerve roots at the tail end of the spinal cord in the lumbosacral region. Cauda equina syndrome is also known as lumbosacral stenosis, which refers to a narrowing of the vertebral canal around the lumbosacral region of the spine. This narrowing impinges upon the cauda equina structure, causing lower back pain, rear limb pain, lack of coordination in the rear limbs, and even an inability to control bowel and bladder. The MRI picture on the left (from VetsOnline) shows a disc protruding upward into and impinging on the cauda equina structure; this has been circled in red.

Cauda equina syndrome can be something that is acquired during the dog’s lifetime through arthritic narrowing of the vertebral canal or from a bulging disc, or it can also be a genetic condition (a genetically narrower vertebral canal). In German Shepherd Dogs, cauda equina often seems to be linked to the presence of a transitional vertebrae, which in itself creates greater instability in the lumbosacral region of the spine. Affected dogs usually begin to show signs between 3 – 7 years of age.

Symptoms of cauda equina include: difficulty laying down and rising, pain in the back, rear limbs, or tail, a restricted gait in the rear, and sometimes excessive chewing on the hind limbs and pelvic regions due to the nerve pain. The symptoms of cauda equina often mimic other conditions, including hip dysplasia, spinal subluxations, or even muscle strains of the back or rear limbs. Sometimes the first signs are refulsal to jump over a hurdle or into a vehicle. However, a dog that is refusing to jump the 1 meter hurdle in IPO, for example, could be doing so for a variety of reasons, which is why it is important to have a vet thoroughly check the dog for signs of injury before searching for something more serious like cauda equina. Cauda equina can sometimes been seen on x-ray, but most often a special dye must be injected into the affected area to provide better contrast, or an MRI must be done to definitively diagnose it.

Treatment of cauda equina varies based on the cause and severity of the condition. Mild cases are treated with strict rest for 6-8 weeks, in conjunction with anti-inflammatory medications. However, when the dog returns to a more active lifestyle, symptoms may return. More severe cases often require surgery to relieve the stenosis, or narrowing, of the spine and/or the instability that created the arthritic narrowing.

In German Shepherd Dogs, Degenerative Myelopathy (DM) is a recessive genetic condition. Most affected dogs have inherited two copies of the defective gene, although this does not fully reflect if, when, or how severely the dog will develop DM. With DM, the dog gradually begins to lose control of their rear end. Unlike cauda equina, DM itself is not painful, as it involves a gradual loss of sensation and nerve function in the rear limbs. This is because the disease results in the loss of the fatty myelin sheath surrounding the nerves in the spinal cord, and in the loss of axons (nerves) extending out to the limbs. The dog begins to lose the ability to successfully transmit information from the brain to the limbs, and from the limbs to the brain. This results in the loss of sensation and a loss of control of the hind limbs in particular, with knuckling over of the hind feet (which often then drag, resulting in open sores on the top of the feet) and the inability to sense that the feet are not in their right position (loss of proprioception). The disease tends to manifest in middle to older age, although there have been cases of younger dogs (3 or 4 years of age) suffering from DM.

Degenerative Myelopathy is a progressive disease that gets increasingly worse as time goes on. There is little that can be done to stop or slow the progression of the disease, unfortunately, which makes genetic screening one of the most powerful tools against DM. Dogs that are carriers, with one copy of the gene, can be bred successfully to dogs that have two normal copies of the gene, and will produce offspring that are either completely normal or are carriers (but should not ever develop the disease, as two copies of the defective genes is necessary in the majority of cases.). Dogs that have the two recessive copies of the gene can still be bred to successfully, as long as they are bred to a dog that is homozygous normal for the trait. All the puppies will be carriers for the recessive DM gene, but there is an infinitesimally small chance of a carrier ever developing DM. Studies thus far have shown that dogs possessing two recessive copies for the DM gene are at most risk for developing the disease. Further discussion of test results for DM can be found here. 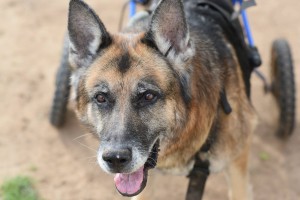 Treatment for DM essentially consists of supportive care that focuses on improving the quality of life for the dog afflicted with the disease. This includes good nursing care at home, devices to help with mobility (such as harnesses, slings, and carts), and physical therapy. The goal is to mediate the symptoms of the disease as best as possible, and to make the dog as comfortable as possible.