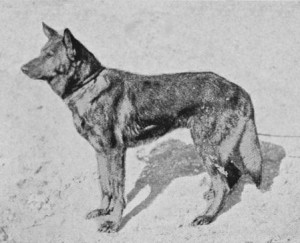 During their quest for that perfect German Shepherd for sale, many people will undoubtedly come across references to Horand von Grafrath and Captain Max von Stephanitz, the breed founder.  Horand von Grafrath is considered the ‘founding sire’ of the German Shepherd breed. He was selected by von Stephanitz for his desirable traits such as pricked ears, medium size, beautiful head, and wolf-like expression. Horand’s temperament was one of incredible joy, energy, and desire to play, but also with what Max called an “almost untamable wildness” that made it difficult to train Horand. 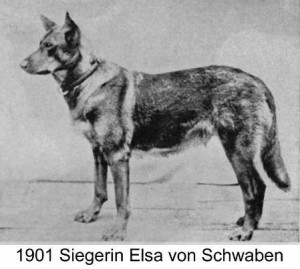 Elsa von Schwaben. Elsa was the daughter of Fides von Neckarursprung, who was from pure Wurttemberg lines.

The second regional type used to develop the breed was the Wurttemberg sheep dog. These dogs were much larger and heavier-boned than the Thuringian type, had better movement as well as a better tail set, and also possessed large, thick paws that allowed them to work all day on any type of terrain. These were active working dogs. They were also known to be very intelligent, very biddable, and very trainable, unlike some of the Thuringian dogs. The Wurttemberg dogs were easily distinguished by their powerful and majestic appearance, shrewd yet good-natured expression, and cool reserve or aloofness that warranted respect. They were naturally more discriminating and less easily provoked to bite when guarding their flock, but when they did engage they were known to grip with great conviction and courage (unlike the Thuringian type, which was more easily provoked and lacked good discrimination). The Wurttemberg regional type left its “stamp” on the developing German Shepherd breed through temperament, trotting structure, working ability, intelligence, and courage. 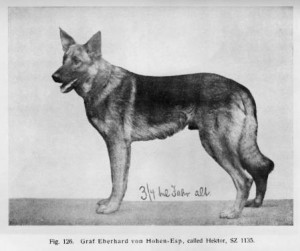 The last regional type was the Swabian service dog. These dogs were left out in the fields with the sheep to protect the flocks from wolves and other predators. Swabian dogs were even larger in size than the Wurttemberg dogs, and were intelligent, steady, calm, and versatile.  This regional type also possessed great courage and conviction, and would not back down in a confrontation with man or animal. Because of these genetic traits, these dogs were used to establish the original Police Dogs. It was the Swabian ‘utilitarian’ dogs that brought versatility, strong temperament, and working ability to the German Shepherd breed.

From the careful blending of these three regional types, one breed emerged. The most desirable aspects of each type were selectively bred and “fixed” into one utilitarian, versatile dog that could excel in all types of work: the German Shepherd Dog.  –CK 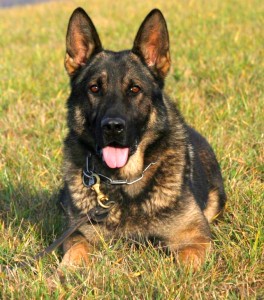