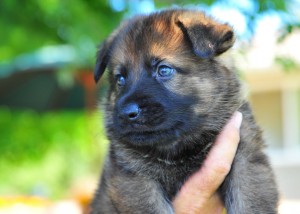 When it comes to serious competitors in the sport of Schutzhund/IPO, titles on the puppy’s parents matter, because these show that their future puppy is receiving its raw genetic material from parents that were successful in the sport. But for someone looking for just a pet German Shepherd puppy, does it matter whether a breeder titles their dogs or not?

What Does a Title Show?

If someone is only looking for a pet, why should they consider buying a puppy from parents with a working title? After all, their pet will not need the drive or desire that a working dog should have; all they want is a good companion. So are titles on the parents really all that important?

A working title like an IPO or Schutzhund title (or advanced herding title such as the HGH) can tell the potential puppy buyer several things, both about the dog and about their prospective breeder:

1. German Shepherd Dogs should be intelligent, trainable, tractable dogs. Having a working title shows that this particular dog is intelligent and trainable, and is capable of being trained reliably to an advanced level. It shows the dog has a desire to work with its handler, and the ability to learn new behavior. The dog that possesses these traits can pass them to its offspring. A dog that does not have these traits cannot! This is very important for the pet owner, because a dog that has the genetic desire to learn and to work with its handler is much easier to train! 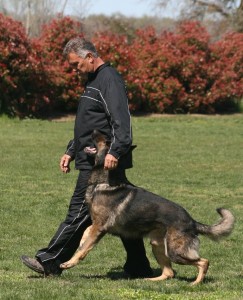 2. A working title demonstrates that the breeder does more than just breed their dogs. They are engaged with and involved in other activities besides breeding their dogs over and over, and they are able to connect regularly with other people within the breed. Just as collaboration with knowledgeable colleagues and access to good programs build a better working environment, so also do collaboration with knowledgeable GSD people (breeders, handlers, trainers, judges) and access to good German Shepherd Dogs build a better breeding program.

3. A working title shows that the breeder has had the opportunity to compare their dogs with other representatives of the breed, and to compare them against a set, objective test (that was designed with the German Shepherd Dog in mind). They can see how their dogs match up to other well-bred specimens, and how their dogs match up to the objective test of IPO/Schutzhund. Without this, the breeder’s only standards are their own dogs and their own personal opinions on them. This often includes the claim that the dogs are “papered”, and therefore of great quality. However, simply “having papers” is not an objective test or qualification for breeding!

4. A working title shows that the dog has actually left the breeder’s property, and been exposed to everyday situations beyond the small world of the breeder’s home.  They have been exposed to and socialized with the world at large, and have not been kept locked up in the house or backyard for their whole lives. Taking a dog out in public and working it in public (as all trials must be open to the public) tends to provide evidence for a stable, well-rounded temperament (compared to a dog that must be left at home because she is “afraid of strangers”,  or is “uncomfortable in public places”. Temperament is genetic!).

5. The GSD is supposed to have a confident, resilient temperament that allows it to capably handle the stress of the world around it. A working title shows that this dog has been through the stress of training and trialing in an environment much different from its comfortable home, and the dog has handled it successfully. This, too, tends to indicate a solid, stable temperament. Stable temperament is a MUST for the pet owner.

6. A working title shows, in part, that the dog has the proper working temperament of a German Shepherd Dog. In the GSD breed, good temperament has always been linked to working ability since the very beginning of the breed. Whenever temperament was failing in the breed, breed founder Max von Stephanitz  and the early fathers of the breed brought in working dogs (particularly females) to stabilize it. They did not bring in show dogs, nor “pet dogs”. They brought in working dogs that were tested for their working ability through the HGH trial (advanced herding trial, involving large flocks of 200 or more sheep). To breed for one aspect (looks, conformation, pet qualities, etc.) while neglecting the working ability causes a downward spiral in the quality of the dog’s temperament. This has been seen time and time again throughout the history of the GSD. This is one reason why titles are so important. They show the dog has the genetic ability and temperament for the work, and this in turn preserves the valuable genetic traits that make the German Shepherd Dog such a wonderful companion.

In the words of the breed founder himself: “Take this trouble for me: make sure my shepherd dog remains a working dog, for I have struggled all my life long for that aim.”

But Titles Aren’t Everything!

This is a common criticism directed at those breeders who wisely insist on titling their dogs before breeding and on only using titled dogs in their breeding programs. It is true that titles aren’t everything—meaning that breeders should not breed on titles alone, nor should puppy buyers buy a dog based on titles alone—but this is used by many pet breeders as an excuse to not train or title their dogs in anything at all! They move from “Titles aren’t everything” to “Therefore I don’t need to do anything with my dogs to show their true qualities.” That is quite a jump, and it is not logical. It becomes an excuse to rationalize a breeding program that uses untested dogs. 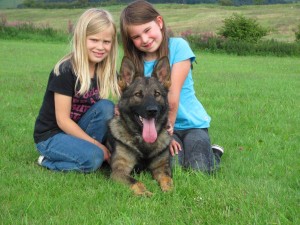 Good breeders look beyond the title, and look at what it reveals about the dog.  Titles show the dog is capable of doing the work and of enduring the stress, pressure, and temperament test of trial day. In other words, the title verifies that the dog can do it, has the basic genetic abilities to do the work, and possesses on some level the basic traits for which the German Shepherd Dog is valued (such as courage, resilience, confidence, hardness, devotion to master, trainability, and intelligence). But after this, breeders often look to the training for the title, coupled with the dog’s performance on trial day, to provide in-depth information into who the dog is. This provides answers to questions like:

Next blog we will tackle the question of “Why Protection?” What does a title in a sport with a protection phase show us that obedience, agility, and tracking titles do not?

* = If, after reading through and thinking through this, you still feel that titles do not matter to you, then PLEASE look into rescuing a German Shepherd Dog from a local breed rescue instead, rather than buying a puppy from a breeder who does nothing but “breed pets”.  There are many pet-quality German Shepherd Dogs waiting in shelters and rescues for good homes and good owners!