Breeding for the “Show Ring” 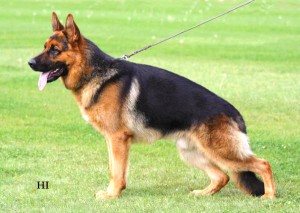 Breeding for the conformation ring, or “show ring”, has been blamed by many people for ruining a range of once-workable breeds, from Golden Retrievers and Labs to Dobermans and German Shepherds. When it comes to selecting a German Shepherd, this belief has led many pet owners to avoid those “slope-backed” show dogs, opting instead for a variety of GSDs bred for all shapes and sizes–often from ‘breeders’ whose claims to fame are “straight-backed” and “Old World” dogs, an attempt to delineate their “normal” dogs from the overly elegant, overly angulated show shepherds (and to draw in unsuspecting, uninformed puppy buyers). There are even good breeders in the U.S. who primarily breed for temperament and working ability, with structure and conformation as an afterthought, as ‘icing on the cake’. Yet in Germany and other countries breeding to the SV standard for the GSD, conformation ratings and breed surveys–in addition to working titles–are both essential for breeding dogs.

An emphasis on conformation shows and breed surveys raises many important questions. What is the benefit to having a dog trot around a ring and be judged on its structure, rather than on its temperament, working ability, and functionality? What does it matter if the dog is 85 pounds or 110 pounds? Why should there be the “more angled” rear, rather than the more straight-legged look of the Labrador? If the dog can work, why does it matter if it has good conformation? All of these can be answered by looking at the GSD breed standard.

While the German Shepherd Dog was created first and foremost as a working dog, the structure of this working dog was also of tremendous importance. The breed standard was set early on to develop a medium-sized dog with a trotting structure that allowed the dog to tirelessly and effortlessly tend to its flock. Endurance, stamina, and versatility were the goal. The dog could trot endlessly and fluidly, yet still corner effectively and gallop quickly and jump powerfully. The dog was not intended to be a heavy, tall, loosely muscled guardian dog, but neither was it supposed to be a small, wiry Border Collie type dog.  It was not intended to be an exceptionally long-bodied dog with extraordinarily long stifles for that ‘flying trot’, but neither was it supposed to be a closely-coupled, square dog like the Belgian Malinois. The intention was for the dog to be “in between”, and it is this “in between” that has helped make the German Shepherd Dog an athletic yet versatile animal capable of a variety of tasks. It was this standard—and an adherence to it—that has given the breed its characteristic appearance and structure. It is deviations from this standard or an emphasis on various conformation “fads” that have given us sway-backed, roached back, too tall, oversize, over-angulated, improperly colored GSDs.

Why Show Ratings and Surveys?

Working titles emphasize temperament and working ability. Show ratings emphasize appropriate structure and adherence to the breed standard that makes the German Shepherd Dog what it is. Breed surveys combine both worlds, serving as a valuable tool for proving both working ability and structure. In order to effectively answer the question of whether or not conformation ratings really matter, it is important to look at what German show ratings and breed surveys tell us about a breeder and their dogs.

1. The dog has appropriate conformation within the standard of the breed, and has been evaluated against this objective standard by what should be a truly knowledge objective expert (the judge). The dog has been judged to have the proper height, structure, color, coat, teeth, etc. for a German Shepherd, and does not have any disqualifying faults such as undescended testicles, missing teeth, overbite, underbite, too large in size, too small in size, improper coloration, etc.

2. If breed-surveyed, the dog has passing hip and elbow ratings, has undergone a 12-mile endurance test known as the AD, and has achieved a Schutzhund/IPO1 title or HGH title. This  helps demonstrate soundness of structure, stamina, working ability, and soundness of temperament.

3. The breeder has knowledge of the standard set for the breed, and is striving to breed dogs that actually look like German Shepherd Dogs. This also means that the breeder is not just relying on their own personal opinions and ideas about what a GSD should look like as their only “standard”. An open-ended interpretation or opinion of what a German Shepherd Dog should look like gives rise to the problems discussed in #4.

4. The breeder strives to breed appropriately-sized GSDs with correct conformation. This immediately rules out any of those “breeders” who are claiming to breed “rare colors”, “straight-backed” dogs, and “Old World” GSDs, which translates to huge, oversize, heavy dogs. The breed standard exists for a reason, and is responsible for creating the animals known today as German Shepherd Dogs. Adherence to this standard is what makes a GSD a GSD. For “breeders” to throw this away by breeding faulty colors like livers, blues, and whites, or to breed animals well over the size limit  because “the older GSDs were much bigger” (and they were NOT) demonstrates a lack of knowledge of the breed standard and a disregard for the true health and purpose of the German Shepherd Dog. Therefore, how can this “breeder” make informed breeding decisions if they lack the basic understanding of what a GSD is?

5. If achieving breed surveys with their dogs, then the breeder is actively health-testing and titling their dogs, x-raying hips and elbows at the minimum and training to a SchH1/IPO1 at the minimum. Hip and elbow x-rays must both be passing in order to achieve a breed survey, and the dog must have a working title as well.

Both working and show ratings are useful for the “complete dog”, proving both the temperament and the conformation of the dog. Both aspects are needed for the total GSD. Show-only dogs are bred primarily for looks, without emphasis on temperament. Working-only dogs are bred primarily for working ability and temperament, but structure can suffer if care is not taken to ensure that functional conformation is maintained. A working dog must be built to last, and proving proper structure is one way to ensure this.

This brings up another point of contention between those who work their dogs, and those who show their dogs. This would be the concern of Functional Conformation. The German Shepherd standard was created with an emphasis on function, not just form. For example, the rear angulation of the dog should be enough to power the energy-saving, ground-covering trot, but not be so excessive that the dog cannot gallop quickly, turn quickly, and jump easily (to see a video of the trot the GSD is known for coupled with the appropriate structure, check out this video of 1983 Sieger Dingo vom Haus Gero). The dog’s size should be large enough to stop a man, deter predators, or take on a stubborn sheep, but not so large that the dog loses agility, speed, soundness of body, and stamina. Balance is required in order to prevent conformational extremes from taking the place of functionality. This is also one of the intents of a breed survey: to provide balance and information in both conformation and working/temperament aspects.

Many GSD enthusiasts and breeders argue that in the quest for VA (Excellent-Select) structure, the emphasis on ‘function’ has decreased as  a particular look was repeatedly rewarded in the show ring and then sought after by show breeders. Some argue that many of the dogs competing in the large conformation shows in Germany have a structure that is not conducive to work, that cannot withstand the repetitive stress of herding and Schutzhund, nor handle jumping and galloping without difficulty. Functional conformation for the GSD has been lost nearly completely in the American German Shepherd due to the emphasis on the side gait (“flying trot”), and so good breeders adhering to the SV standards (not AKC standards) are seeking to ensure that the same thing does not happen to their beloved German Shepherd breed. 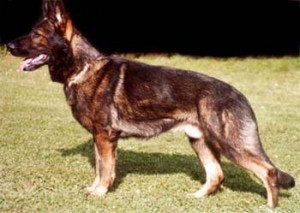 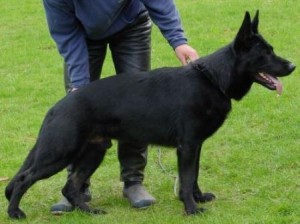 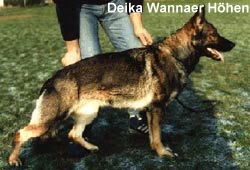 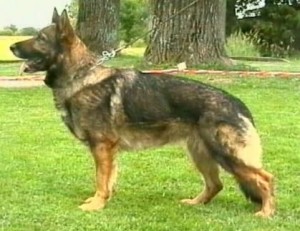 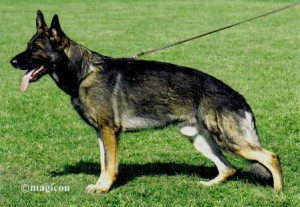 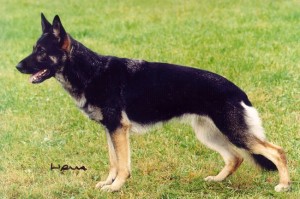 In the ideal German Shepherd world–or any working dog world–one aspect should not be sacrificed for the other. The ultimate GSD should have both conformation and working ability. The GSD is a breed that needs both aspects to maintain its characteristic look and functional purpose, proving that show ratings are not “just for pretty dogs”, and working titles are not “just for ugly dogs”.