No phase of Schutzhund has received more criticism and been steeped in more controversy than the protection phase. Ever since Schutzhund’s introduction here in the U.S. in the mid-1950s, the bitework portion of the sport has continued to raise eyebrows and draw harsh criticism from “animal rights” advocates and even some breeders. Even the AKC bowed to this pressure in the mid-1970s, withdrawing their support of the growing Schutzhund movement by refusing to acknowledge Schutzhund titles and ceasing to host Schutzhund trials (which helped act as the impetus for the development of the United Schutzhund Clubs of America, or USCA). But despite the fact that the AKC has reversed their position on Schutzhund in recent years, many American German Shepherd breeders still refuse to participate. Why would the breeding of German Shepherd Dogs need a sport that includes a protection phase?

Protection vs. Other Sports

Many critics question the value of the protection phase. There are tracking titles, obedience titles, agility titles, AKC herding titles, and conformation titles. Why would protection be needed? These other titles already reveal much information about the dog—their willingness to work with man, their athleticism and skill, their natural aptitude, their desires and drive for the work, their structural strengths and flaws, their ability to work in different environments successfully. Other than conformation titles, these different sports show that working breeds can “do work.” What does protection reveal that is any different from these other working titles?

There are traits valued in working breeds like German Shepherds, Belgian Malinois, Dobermans, and Rottweilers that are not tested by these other sports. This includes traits like:

Other titles can show how agile a dog is, how willingly they come under the handler’s control to carry out a variety of obedience exercises, or how well they can use their nose, but there is no feedback about the other elements that make up the dog’s full character. These other elements include the inherent “ratio” of prey drive and defensive drive, and the levels of fighting drive, resilience, hardness, courage, sharpness, and yes, aggression.

Most importantly, however, is that the protection phase reveals the dog’s true character and genetic makeup. Dietmar Schellenberg, the first licensed, FCI-accredited German Schutzhund judge to reside in the U.S., put it best when he said: 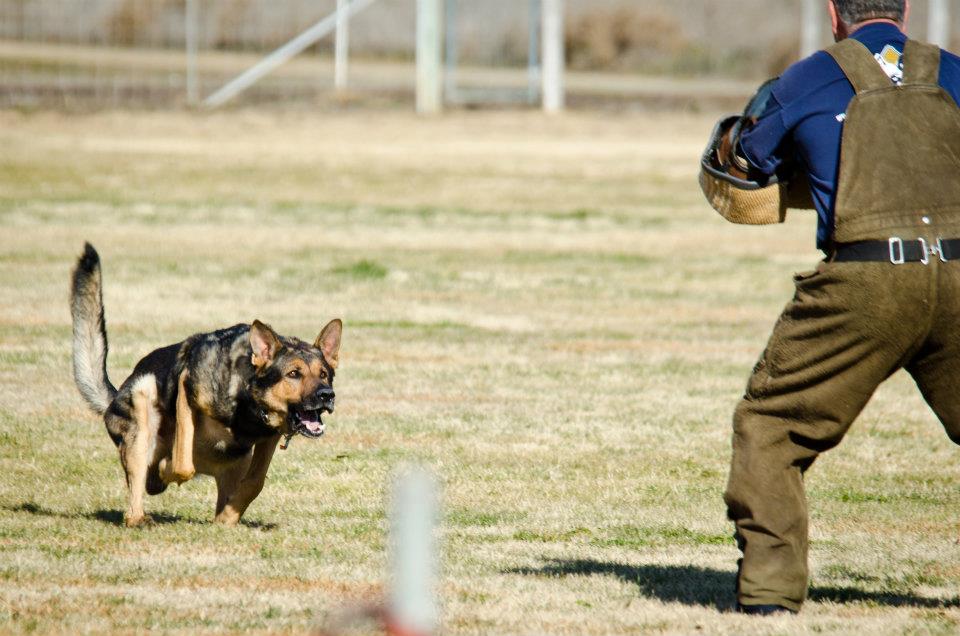 Eager, alert, committed. “No other phase of training exposes so much  of the true temperament, the working spirit, the strengths and weaknesses in a dog than properly conducted man work.” (Photo by: Kris Dakin)

Protection reveals more of the genetic makeup of the dog than any other sport, instead of solely revealing the talents of the trainer and handler. A dog cannot be “made” to successfully do protection training or the protection phase in a Schutzhund trial. Rather, the dog must have the innate genetic drives, desires, and aggression, coupled with the proper stable and social temperament. The dogs do protection work because they want to do it, and they enjoy doing it (one only has to watch a Schutzhund trial to see that this is the case!). Because of this, the protection phase simultaneously weeds out dogs that are too fearful, too sharp, too soft or afraid to engage, or overly aggressive. Fearful dogs and dogs that are dangerously aggressive cannot successfully do the protection phase of Schutzhund. Protection requires a stable, clear-headed temperament with a balance of drives and a natural confidence among both people and the environment. Schutzhund trials are structured to emphasize sound temperament, and to reveal the basic temperament and weaknesses in the dog’s character through the protection phase.

Protection and the Dog’s Character

But why does it matter if the German Shepherd Dog has a desire and ability to do protection work?   Because the assessment of the working dog’s full character is incomplete without protection. You can have a GSD that has excellent obedience, a happy work ethic, a stable and social temperament around people, and the alertness characteristic of the breed. But does the dog have courage? Is the dog resilient and unyielding when confronted with a threat? How does the dog stand up under pressure from a worthy human adversary? The dog may be biddable and compliant, but can lack the depth of character and strength of temperament desirable in the GSD. The dog may be an excellent obedience or agility or tracking dog, but may lack a crucial component of what makes the GSD one of the top working dogs in the world: a confident character that is unafraid to confront a threat and stand its ground. This dog may still be a nice dog, and is no doubt a great family pet, but should this dog be bred to produce more “nice pets?” No.

How do we know if the dog that barks at strangers coming up to the house and appears to be a good “guard dog” will not turn tail and run away when pressured, rather than stand its ground? How do we know if a dog that appears alert and vigilant is confidently alert and curious, or is slightly “edgy” and a little weak-nerved, feeling a constant need to assess the environment for a threat? How do we determine the full measure of a dog’s confidence and depth of character? We do this through properly conducted protection training and titling in Schutzhund/IPO, Ringsport, or the HGH (German herding trial, which also has a protection component).

If breeding were done based solely on titles in other sports without a protection phase, the elements that support the working dog temperament would slowly disappear, leaving behind dogs that may look like a German Shepherd, but are one in name only. The dog may be compliant, the dog may be athletic, the dog may be alert and vigilant-looking, but the confident temperament and willingness to stand its ground will be replaced with a dog that is nervous and afraid, lacking courage and strong nerves. One only needs to look at the American German Shepherd–bred mainly for the conformation ring without the quality control of a sport that includes a protection phase–to see that this has already happened! Where is the courage and confidence and versatility for which the breed is known? Without the protection work testing potential breeding dogs, we will not have police dogs, military dogs, explosives dogs, rescue dogs, search dogs—in other words, we would not have dogs that must have courage in the face of danger and have stable, unflappable temperaments. Working breeds like German Shepherds, Belgian Malinois, Rottweilers, and Dobermans need protection sports to help preserve the valuable traits and strength of temperament in the breed.