Every week, German Shepherd Watchdogs, LLC receives at least one or two calls asking for evaluation services and/or training help for dogs displaying inappropriate aggression — resource guarding, snapping at kids or other pets, excessive aggression toward strangers, or aggression toward one particular family member (usually a spouse or boyfriend). In the majority of cases, this problem began in late puppyhood, but was allowed to continue until it grew to the point where it was a real problem at maturity.

Many of these people have also sought some training for their dogs, but most of the training available to them is purely positive pet training, and is performed by trainers who are not equipped with the knowledge and experience to effectively modify aggressive behavior. Now the owner’s only choices are intensive retraining and rehabilitation, rehoming their dog, or euthanasia. They look at their beloved pet and wonder: what happened? 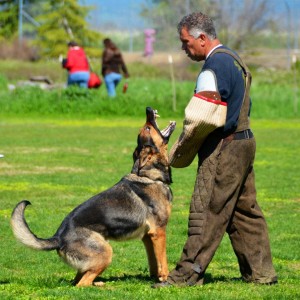 One of the first steps is to gain a better understanding of aggression in dogs. Unfortunately, the majority of “dog trainers” whose services are available to the general public have little to no understanding of aggression. One must look to the Schutzhund trainers and the police dog trainers in order to gain insight into the various forms and reasons for aggression; after all, these are the people who generally not only understand aggression in dogs, but successfully work with it on a regular basis.

Perhaps one of the foremost authorities on canine aggression is Helmut Raiser. Raiser has written extensively about the different “drives” dogs have and the different types of aggression in his book Der Schutzhund.

The stimulus for most aggression in dogs is worry and/or fear. This places most aggression in the realm of defensive aggression, where the dog is displaying behaviors to defend itself, its territory, its possessions, or its pack. The end goal of defensive aggression is to create avoidance behavior in the person or animal perceived as threatening. Thus, a dog with a resource guarding problem is looking for the “threat” — the family member or other dog that it fears will take its food — to back off and leave it alone. A dog that growls when you approach it on the couch is worried about your encroachment on its “territory” or against its perceived status in the pack.

Indeed, anxiety or worry is at the root of many aggressive behaviors; understanding this can help handlers deal with inappropriate aggression more effectively. Specifically, more conflict is usually the last thing you want to add to a situation where a dog is already anxious to the point of aggression.

Another form of aggression in dogs is called social aggression. This is directed toward one’s own species, although in the realm of dogs, their concept of “pack” has been expanded to include humans. With true social aggression, however, worry or fear is not required as a stimulus. These dogs are usually very confident, but are not openly friendly with strangers outside of their pack. However, the majority of dogs today that “don’t like strangers” are actually displaying fearfulness or uncertainty toward the stranger, NOT true social aggression.

Very few dogs have active social aggression, although it is a desirable trait for police and military dogs.  These dogs will confidently seek out the threat whether on or off their home turf, rather than retreat or resort to defensive behavior.

Dominance behavior is not necessarily aggression (although it is commonly called “dominance aggression”), but it can lead to “aggressive” behaviors. This is the dog that may like to jostle for rank, that may begin displaying dominant and threatening behaviors in an attempt to move itself up to a higher status. These types of dogs always need very clear, consistent leadership from ALL members of its human “pack”, not just from the owner.

This behavior is quite common in adolescent males of working breeds, which requires owners of these dogs to set clear, enforceable boundaries through consistent obedience training. Again, ALL members of the household must be included in this obedience training, so that the dog does not begin to see one particular member of the family as “lower status”, but learns to respect them all appropriately.

in our next blog we will tackle inappropriate aggression and discuss several of the most common reasons we have seen for persistent “aggression problems” in maturing dogs.