The Ball That Was His Last 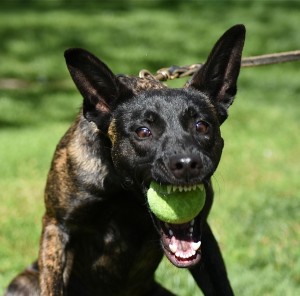 It was the last ball he ever had. He played with it every day for five years until he died, when the ball lodged in his throat and cut off his air supply. Covered in saliva and wedged deep into the pharynx, the ball was slippery and impossible to remove without surgical assistance. But by the time his handler transported the dog the vet, it was too late. His best friend had been killed by the very thing he loved most: playing fetch with his favorite toy.

Ball-related deaths and injuries can occur in any breed, but more often in high-drive, active breeds. In toy-oriented dogs, playing with a tennis ball, racket ball, chuck-it ball, or any other loose ball can be a disaster waiting to happen. Whether it is the dog that throws itself after the ball during a wild game of fetch, or the dog that entertains himself by bouncing his ball and catching it again, the risk of choking is all too real. From police K9s  to pet dogs, an unattached ball lodging in an airway is a devastating mistake that can cost your dog his life.

Many dogs love to play with a ball. But a round ball is the perfect size and shape to lodge into a dog’s flexible, elastic throat and completely block airflow into the trachea. It is just a round orb with nothing else attached, and once it is lubricated with the dog’s thick saliva, it becomes a slippery mess that can be impossible to grasp if it gets stuck. And with many dogs’ reckless abandon in chasing a ball and snatching it in mid-air, that simple loose ball becomes an airway-blocking projectile or a traumatic injury waiting to happen.

Many owners and working dog handlers make the mistake of selecting a ball that is too small for their dogs, and that would be nearly impossible to retrieve should the dog get it lodged in his throat. With the dog’s jaws being able to open so widely, most standard balls (tennis ball, baseball, lacrosse ball, racket ball, etc.) can easily fit into the back of the dog’s mouth, making it a potential choking hazard. Fortunately, there are simple solutions if owners, K9 handlers, and working dog handlers are willing to change for the safety of their dogs. This simple change could save your dog’s life, and in the case of working dog and K9 handlers, protect a partner worth thousands of dollars and years of training.

Simple Solution–Ball on a Rope 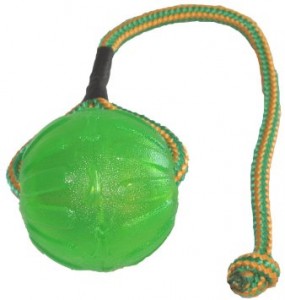 The best solution: get a Kong or a bigger ball with holes, and put it on a rope. The rope should be approximately 14-16 inches long, and can have a small knot at the end to help with gripping and throwing (see ball to the right). The rope serves many purposes:

Adding a rope should reduce the likelihood of incurring a training accident involving the ball, whether from the dog choking on it or from the dog chasing an erratically bouncing ball and injuring itself this way.  Most importantly, the rope can be a lifeline, as a handler at our own Schutzhund club recently learned when his dog’s ball became lodged in his throat during their obedience training.  That rope saved his dog’s life, allowing him to extract the ball quickly (Lesson learned–he bought a bigger ball on a rope after that).

Don’t leave small or destructible toys—including balls, even if they are on a rope—with your dog when he is alone. The ball on a rope is not a chew toy; it is meant to be an interactive toy. Do not leave it with the dog for him to chew up and destroy. Even if the dog doesn’t chew but entertains himself by tossing the toys and catching them, he is still at risk of accidentally wedging one of the toys in his throat. If you must leave your dog with toys, select only one or two indestructible toys that are sufficiently large for your dog and of an appropriate shape so that he cannot get the toy into his throat.

Immediately replace balls on a rope or Kongs on a rope that show wear and tear. If the rope is fraying, replace it. If the ball is starting to tear or crack, replace it. You do not want that toy to get lodged in your dog’s throat and then have the rope rip out because the ball was cracked or the rope was frayed. That rope is a lifeline for the handler and the dog.

Becoming versed in canine CPR and Heimlich maneuvers can also be beneficial, although these do not correct the root cause of playing with a loose ball that can block the dog’s airway.

“It Could Never Happen To My Dog” 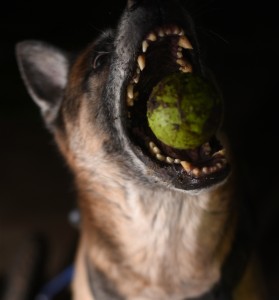 Most handlers who have lost a dog this way never thought this would happen to their dogs, either, including  K9 handlers who lost their partner to a training accident caused by a loose ball. These dogs often played for years with the same type of toy, until one day, that ball got stuck. The lucky ones were able to get their dog to the vet in time to extract the ball, although this in itself can be a risky and challenging procedure. The simple change of using a larger ball or Kong with a securely attached rope could have prevented these tragedies.

Many handlers and pet owners say their dogs are smaller in size and thus can play with smaller balls like tennis balls safely. Besides the abrasive nature and toxic chemicals in tennis balls, their size offers up a third strike against them. The canine jaw is able to hinge open very widely (see photo on left; this ball is larger than a baseball, approximately 4 inches in diameter), allowing even a medium-sized dog to swallow (or attempt to swallow) a reasonably large object. The widely-hinging jaw is an evolutionary adaptation for our dogs, one that allowed them to bolt down rather large chunks of meat and bone (as anyone who has watched their dog swallow a chicken leg quarter knows!). Regardless of the dog’s size, the solution is still simple: put that ball on a rope, and don’t leave the dog with small or destructible toys.

“But My Dog Won’t Play with Those Toys” 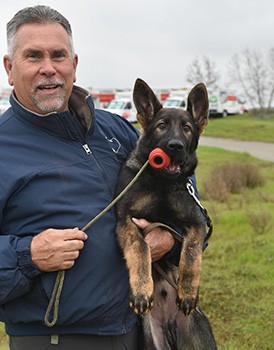 Most high-drive, toy-oriented dogs can be taught to play with nearly any type of toy. The problem usually is with how the handler attempts to engage the dog with the new toy. They aren’t excited about the new toy (and thus the dog isn’t either by default), or are doubtful their dog will enjoy it (which is communicated easily to the dog through body language). They may not make it engaging enough for the dog, or give up too quickly when their dog does not show immediate interest. Sometimes the dog has so many toys around that another one is just nothing special to them. The handler may have to work a bit to get the dog to enjoy the new toy, but the life of the dog is worth that extra work.

Just one simple change can potentially save a dog’s life. It is not a difficult change, nor an expensive one. So put aside the abrasive, toxic tennis balls and slippery racket balls and chuck-its, and invest in sturdy balls or Kongs on ropes that have been made for working dogs and interactive play.